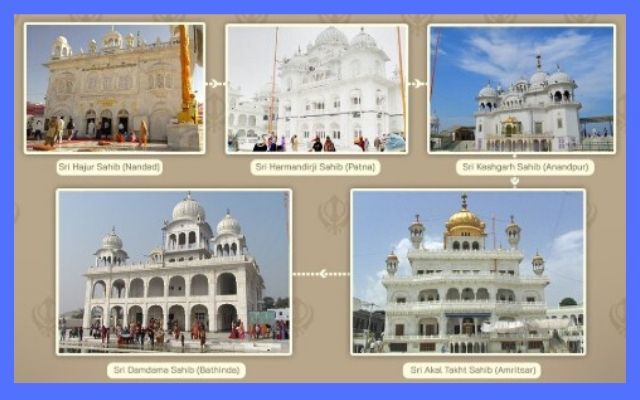 Introducing you with the 5 Sikh Takht sahib names

The first name among the 5 Sikh Takht sahib names is Takhat Shri Akal Takhat Sahib which in simple words means the supreme seat of that timeless one or in other words the throne of God. This Shri Akal Takhat Sahib is situated in the city of Gurus named Amritsar. Being the most important among the 5 that's, Shri Akal that sahib was built by the sixth Guru- Shri Hargobind Sahib Ji with an idea to preserve the political sovereignty of Sikhs. The takhat further stood as a symbol of political and military resistance against the Mughal Empire that used to prevail in the early 17 and 18th centuries..

Takhat Shri kesgarh sahib also known to be the birthplace of Khalsa, is located in Anandpur Sahib and holds high significance among five takht names. This takhat was founded by Shri Guru Gobind Singh Ji in 1699. Diving into the history behind the beginning of Khalsa is that on March 30, 1699, which was proposed to be the Vaisakhi day, Shri Guru Gobind Singh Ji initiated the first Khalsa at takhat Shri kesgarh sahib. This is also the reason why Vaisakhi day in Sikhism is believed to be sacred.

Going into the intricacies of Takhat Shri Patna Sahib, the Takhat holds the temporal authorities of Sikhism. This takhat is included in the five takhat sahib names in remembrance of Guru Gobind Singh Ji on his birthplace. The Gurudwara at Patna sahib is like many other Gurudwaras made by Maharaj Ranjit Singh Ji

4. Takhat Shri Damdama Sahib, Talwandi Sabho
This takhat Shri damdama sahib is another significant takhat considered to be important. With its location in Bathinda, India Shri damdama sahib holds its importance with regards to a chief event which had taken place here. The story entails the induction of the full version of the most sacred Sikh scripture called Shri Guru Granth Sahib Ji in 1705.

At Takhat Shri Darbar Sahib Hazur Sahib stands a gurudwara which is located at the banks of river Godavari in the city named Nanded in Maharashtra. This takhat has been included among one of the five that's of Sikhism as it was the place where their 10th Guru Shri Gobind Singh Ji soul left its body in 1708. The place where Shri Guru Gobind Singh Ji was cremated is called Angitha sahib and holds a separate inner room in the temple. In the remembrance of such a powerful Guru, Takhat Shri hazoor Sahib Nanded name was included among the five takhat sahib names. The place also holds a story which states that when Guru Gobind Singh was alive he had declared his disciplines to not create any monument to commemorate his leaving this world or else all his offspring would die. Despite knowing the fact Maharaja Ranjit Singh built a Gurudwara and it is known that almost all of his offspring died except one named Daleep Singh who was further sent to the UK. Later when the temple construction finished in 1839, later that year, Maharaja Ranjit Singh also died. It is also known that all the 6 offspring of one left son Daleep Singh also died without any concrete reason. In other words,all the offspring of Maharaja Ranjit Singh died.